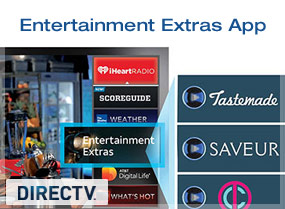 All too often, media and programming companies sit on their laurels after the successful launch of a new device or service. In DIRECTV’s case, the stellar roll-out of the Genie a few years back only served to further motivate their tech/media teams to innovate and make the selection process as user-friendly as possible (DISH’s Hopper certainly lit a fire as well :). Those improvements are usually either tangible (more hard drive space, new channel, etc) or in this case, more of an add-on accessory… the Entertainment Extras, launched just this month, is basically a meticulously compiled collection of internet feeds from some of the more popular websites around (Mashable, PopSugar, etc). in other words, a mix of videos your friends might already be texting you about — here’s a bit more detail…

This is an ever-growing list, but just a few of its more popular sources include Tastemade, PopSugar, Mashable, Saveur, Newsy, Machinima, Jukin and a ton more. In total, you’ll get access to over 100.000 videos at any given time. And, remember, those are all already publicly available on the internet — the convenience here is the Entertainment Extras App centralizes, categorizes and suggests them according to your preferences (much like the Genie does with recommended shows, movies, etc). Big picture, if its suggestion engine gets smart enough, this app has the potential to become a “home page” of sorts for viral videos.

This one’s easy — simply hit the right arrow on your remote and a menu of apps/options will appear. Select “Entertainment Extras” (usually near the top of the list) and you’re all set. As with most functions on Genie’s program guide, it tends to learn your habits over time. So, the more often you select Entertainment Extras, the higher up on the menu it should appear thereafter… just don’t squeeze out the Weather Channel app (else you’re likely to be sporting shorts smack in the middle of a snowstorm :).

Since it’s a new app, expect DIRECTV to give it a bit more exposure right out of the gate. After a few months (depending on how well it does and how often folks return to it), it may get lost in the mix or eventually earn a coveted top spot; only time – and user engagement – will tell.

Finally, you’ve probably figured out the Entertainment Extras App is only available via the Genie (HR44 or newer). Given the programming and light AI involved here, don’t expect it to be available on the non-Genie DVRs anytime soon.

Yep. So, why all the fuss? Well, the Genie is locked into a feature and usability race vs the Hopper… and, in general, while the Hopper boasts a larger hard drive, most folks prefer the look and feel of the Genie. So, as the line between internet and TV gets more and more fuzzy, both systems are itching to tap into your “non TV” time and, likely in the near future, be your media buddy as you surf, shop, email, etc. Apps like Entertainment Extras are just another foray into that space. If there’s a clear DVR winner in a few years, expect a tangible shift of customers to that side. Otherwise, both brands will continue to competitively innovate and churn out the best products available…